Application Activities and the 4 S’s 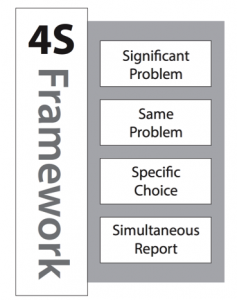 Significant problem reminds us that the problem must be meaningful to the course and rich enough to engage the whole team. A trivial problem that can be solved by a single person working alone does not make a good team Application Activity. Rather, we should be seeking a complex problem with incomplete or contradictory information where a diversity of perspectives is an asset.

Specific choice requires that teams be able to express their solution to a problem by means of an easy-to-describe choice. Before giving some examples of what a specific choice might look like, it might be helpful to consider some examples that are not specific choices: a multi-page report, an oral presentation, a demonstration of a functioning device or process, or an ordered list, to name a few. Creating these deliverables may be valuable experiences for students and may even relate to some of the course outcomes, but they do not lend themselves well towards TBL Application Activities. Instead, the specific choice of a good Application Activity requires that the team members all come to agreement on a single, clearly-defined answer in light of potentially vague or conflicting information. Having teams make a specific choice also makes it possible to quickly see and compare responses between different teams (part of the next “S”). Posing multiple-choice questions is one of the most common ways to require a specific choice, provided the question is not trivial — that is, the problem is significant, as described above.

The revealing of the choices to the class that should be simultaneous, not the recording of the choices by the teams. For example, teams could report their answer to the teacher or teaching assistant by a certain cut-off time in the class, the teacher can record these answers as they come in (perhaps on a laptop or an overhead transparency), and then the teacher can reveal all answers at once using a digital or overhead projector. A common facilitation approach in these circumstances is the “last to report, first to talk” rule.

There is a subtle, but extraordinary feedback and accountability process as part of the whole class report and discussion. If your team didn’t listen to an important moronity opinion or a majority of team members were bullied into a choice, these poor choices often come to light during the whole class reporting discussion. The team members will understand that they committed an error in listening. This self-correcting feedback can automatically improve the team dynamics in subsequent activities.

Consider the following exercise (adapted from Michaelsen, Fink, & Knight, 2004) to be presented to teams in an English class:

Imagine you are an English teacher and you are working with your students to develop their understanding of the active and passive voice. You are trying to develop their next assignment. Which wording in the following assignments would best promote higher-level thinking and a rich reporting discussion?

A. List the mistakes writers frequently make that detract from their efforts to write in the active voice.
B. Read the following passage and identify a sentence that is a clear example of (a) active and (b) passive voice.
C. Read the following passage and identify the sentence in which the passive voice is used most appropriately. 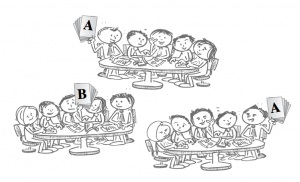 In advance, teams are given three large colored cards prominently labeled A, B, and C. After an appropriate time for teams to discuss and determine their choice, the instruction is given for teams to simultaneously hold up their cards (for example, “on the count of three, hold up your choice”). A teacher-facilitated discussion of the class responses follows.

To highlight the 4 S’s in this example: 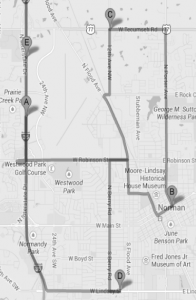 In this second example (adapted from Sweet and Michaelsen, 2012), imagine an economics course in which teams are tasked with identifying the best location for a business:

You are consulting for a new business owner who wants to open a dry-cleaning store in Norman, Oklahoma. Where would you recommend locating a new dry-cleaning business (and why)?

A street map of Norman, Oklahoma is placed at the front of the room and each team is given a pushpin. At the appointed time, after teams have had time to analyze the scenario and reach a supported conclusion, each team sends a representative to the front to indicate their chosen location on the map using their pushpin. The scatter of pins on the map creates a natural motivation to understand other teams’ thinking in determining their choices. A teacher-facilitated discussion of the class responses follows.

This example also makes effective use of the 4 S’s.

As teams also need to be prepared to support and defend their choice during the class discussion, there is little concern of a team changing their decision at the last second if they happen to see a difference between their choice and other teams that have already placed their pins.

The standard TBL approach for simultaneous reporting is for each team to hold up a coloured letter card that indicates its decision.(Note the ring or clip on the cards in the figure used to hold everything together). Each team’s response is highly visible and clearly linked to them. It is also very easy for teams to compare their response to those from other teams. This kind of reporting can be used as the starting point for a facilitated conversation where student teams defend their positions and challenge the positions of other teams. This technique can be effectively used for both short problems (four or five per hour) and long problems (one per hour or longer), provided the rest of the 4 S’s are met. 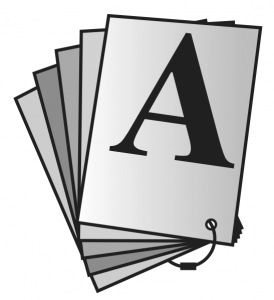 Writing good distractors (the “incorrect” or less correct answers) is essential to this technique. The class discussion is largely driven by teams wishing to understand, challenge, and reconcile differences in the thinking processes that led to the different decisions.

Reporting choices by holding up cards is effective in everything from small classrooms to very large classrooms with 50 teams or more. The greatest challenge in larger classes is to effectively facilitate a whole-class discussion that keeps all students engaged. Some difficulty may also occur in large classes when voting cards only go up for a few seconds, but the reporting conversation takes much longer, since once the cards go down, it is no longer clear which teams had which responses. One solution to this problem is to use ﬂag holders, similar to place card holder stands used on tables at banquets and weddings, that allow teams to indicate when they have completed their work and are ready to report. Voting cards can later be attached to the same stand so they are visible for the duration of the discussion.

When students are working with certain kinds of graphical data (maps, charts, drawings, building plans, concept maps, and so on) you can achieve an effective simultaneous report by having teams select a speciﬁc location as their answer to the question. Teams can either use pushpins or sticky notes to indicate their location choice. The Oklahoma dry-cleaner exercise earlier in the chapter was an example of pushpins on a map. Once each team has decided on a location and made that decision public, you can then facilitate a discussion between teams as they defend their position choice and challenge the decisions of other teams.

An example of this technique from a civil engineering course featuring the use of pushpins is:

An overweight truck has driven onto a bridge. The truck’s weight far exceeds the bridge’s designed carrying capacity. At which location would the bridge structure likely fail ﬁrst? Identify the speciﬁc point on the drawing, and be prepared to defend your position. Show the speciﬁc location with a push pin on the drawing.

A second example below with a “virtual sticky note” requires students to report their choice to the teacher. who then labels each team’s selection on a digital image, hidden from the class until the teacher is ready to reveal it:

Carefully disassemble the Lexmark Z615 printer provided and examine the components. Identify the component with the most significant violation of a Design for Assembly guideline (i.e. the component that, if redesigned, would benefit the assembly process most). Report your component to the teacher before 10:30am. A class discussion will follow — be prepared to justify your choice.

The whiteboard approach is a variation of the voting cards, but is more open-ended. Each team writes their decision on a small whiteboard, similar to the one shown in Figure 4.6. The size of the whiteboard limits the possible complexity of the report, so students can easily compare their team’s decision to that of other teams. Unlike voting cards, teams are not alerted to a possible subset of correct answers. 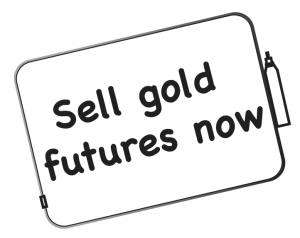 A whiteboard can be used for student reporting in examples such as the following:

Given the following investment portfolio, investor proﬁle, and market conditions, which stock would you sell ﬁrst and when?

A patient presents at the ER with the following symptoms. What would be your ﬁrst course of action? What test would you order ﬁrst?

In each case, after working on the problem, teams write their decision on their whiteboard. In a similar manner as with the voting cards above, the teacher coordinates the simultaneous revealing; for example, “Hold your whiteboards up on the count of three.” Classroom size and layout will have a bearing on the use of this technique, as ideally all teams should be able to see all of the other teams’ answers. Keep in mind that unlike a coloured voting card, which can be viewed from front and back, whiteboards can only be viewed from one side. 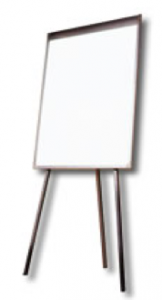 Gallery walks are useful for problems where the solutions cannot be conveyed by a simple A, B, or C choice (well suited to voting cards) or a short phrase (well suited to whiteboards). This can also be used to distill a long, complex solution into its most pertinent elements as teams prepare a concise solution to a complicated problem.

You generally need to make sure that the team responses have some structure to ensure comparability between team outputs. In some activities, this might be to require that teams first state on their poster their choice or decision, and then use the rest of the poster to list further detail such as three strengths, three weaknesses, and two concerns with their choice.

Whatever the method teams adopt, the posters are evenly spaced around classroom walls using masking tape. With the posters on the wall, the actual gallery walk involves having teams review and critique the work of others. In smaller classes, teams can wander around and view the other posters, but in larger classes it helps to coordinate the movement from poster to poster. You will also need to decide how many posters each team

EXCERPTED FROM A 29 PAGE CHAPTER ON APPLICATION ACTIVITIES IN GETTING STARTED WITH TEAM-BASED LEARNING BY JIM SIBLEY AND PETE OSTAFICHUK PUBLISHED BY STYLUS, STERLING, VA 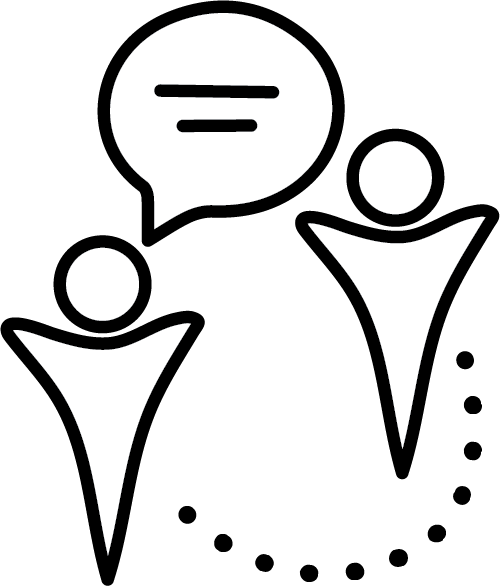 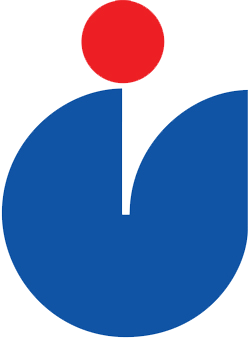